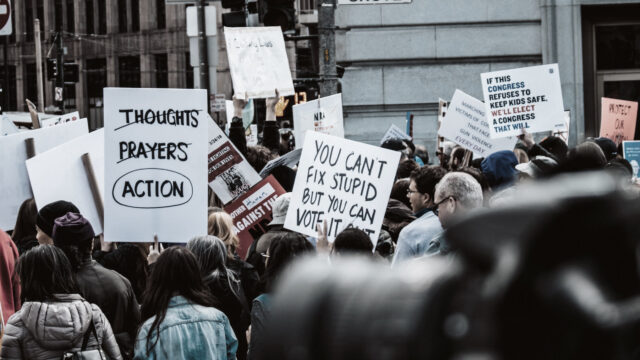 This brief, authored by our partners at Drexel University’s Urban Health Collaborative (UHC), uses data on gun from the Big Cities Health Inventory (BCHI) data platform. Data are shown for our 35 member cities.

Between 2019 and 2020, gun deaths rose 29%, with the increase largely due to homicides. The recent surge in homicides in the nation’s largest cities is not fully understood, but experts point toward a web of causes that converged during the COVID-19 pandemic. Notably, during the pandemic, there was a sharp rise in gun purchases and gun-carrying. In densely populated urban communities that have been subject to years of structural inequalities and under-investment, the proliferation of guns and lack of opportunities for young people have been particularly lethal.

In 2020, across BCHC cities, there were approximately 19 gun deaths each day.

The death rate from guns was eight times higher for men compared to women.

Among men and women, homicides accounted for approximately 65% of gun deaths.

Gun deaths are a leading cause of death among young people.

Gun deaths by race and ethnicity in BCHC cities

Guns killed Black people in BCHC cities at a much higher rate (40.3 per 100,000) than any other racial or ethnic group and most of the deaths were attributed to homicide. The proportion of gun deaths attributed to homicide was approximately 80% for Black persons, 70% for Hispanic persons, 20% for white persons, and <0.1% for Asian & Pacific Islander persons.

Gun violence is a leading cause of premature death and injury in the United States. Gun violence has had profound, wide-ranging impacts across the nation’s largest cities, particularly among Black residents. For communities to flourish, public health strategies aimed at preventing gun deaths must be fully implemented. Big city public health officials have both advocated for stronger state and federal policies that limit access to guns and increased funding for community-based solutions to the gun violence epidemic.

About the data platform

The BCHI data platform is primarily funded by the U.S. Centers for Disease Control and Prevention through a cooperative agreement with the National Association of County and City Health Officials. The views expressed in this brief do not necessarily represent the views of the funders.

Since 2019, the Big Cities Health Inventory (BCHI) data platform has been maintained by the Drexel Urban Health Collaborative (UHC) at the Dornsife School of Public Health in partnership with Big Cities Health Coalition (BCHC). Visitors to the data platform can explore metrics, view data charts by city, select multiple cities for comparison, and download charts and data.

The Big Cities Health Coalition (BCHC) is a forum for the lead health officials of America’s largest metropolitan health departments to exchange strategies and jointly address issues to promote the health and safety of more than 61 million people they serve. The Drexel Urban Health Collaborative (UHC) has partnered with BCHC to support the Coalition’s vision of healthy, more equitable cities through big city innovation and leadership. The UHC is a multidisciplinary research and practice center that leverages the power of data, research, education, and partnerships to make cities healthier, more equitable, and environmentally sustainable.