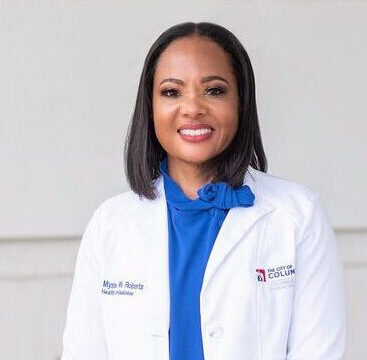 Columbus Health Commissioner Dr. Mysheika W. Roberts leads the organization and a team of nearly 500 public health professionals who are focused on neighborhood-based approaches that address the social determinants of health from safe, affordable housing and education to jobs and violent crime in order to decrease the health disparities that exist.

Dr. Roberts has a prolific, 16 year public health background at the local, state and national levels. Prior to her appointment as Health Commissioner in December 2017, she was the Medical Director and Assistant Health Commissioner at Columbus Public Health. She also built a solid foundation in public health early in her career by investigating outbreaks in Ohio for the Centers for Disease Control and Prevention and leading an STD clinic and hepatitis prevention efforts at the Baltimore City Health Department.

Dr. Roberts extends her service to the community beyond the walls of Columbus Public Health where she is active on several boards, including the Columbus Medical Association Foundation, YWCA of Columbus and the MidOhio Food Bank, as well as the Lifeline of Ohio Minority Advisory Group and OhioHealth’s Faith, Culture and Community Benefit Committee.

A native of Los Angeles, she now calls Columbus home and enjoys spending down time with her husband Edward and their dog Cosby.