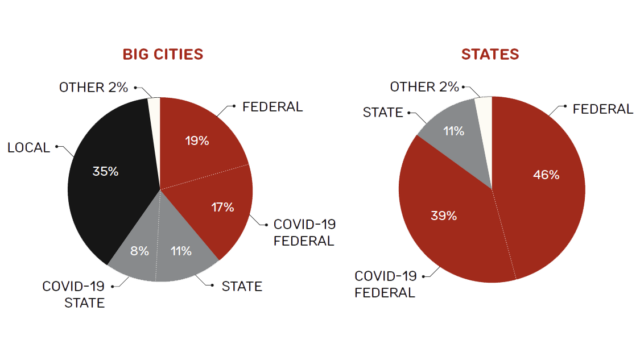 They play a critical role in public health by detecting and tracking numerous issues such as injuries and diseases in our communities. This report reflects the impact of the COVID pandemic on big city health departments and how federal resources to combat the pandemic are not reaching the front lines of health departments, where it is needed most.

An expert scientist who studies, detects and tracks injuries and disease in our communities.

Provide cross-training so epidemiologists can be flexible during emergencies.

Update salary scales to be competitive with other industries.

Set up pipelines to recruit additional epidemiologists, especially those with knowledge of advanced data analysis and emerging program areas like genomics.

Ensure epidemiologists have reliable access to the peer-reviewed research.

Where epidemiologists are—and where they’re needed

Big city health departments have shifted many of their epidemiologists to focus on COVID-19 and infectious disease. Our cities lack the full staff they need to address these areas and are even more short-staffed to address pressing chronic issues.

… and specifically need capacity increases in the following areas:

Big city health departments have the greatest unmet need for epidemiologists in these areas:

Epidemiologists declined in key program areas from 2017 to 2021

Over the last five years, key program areas experienced a decline in the number of epidemiologists. This makes us less prepared for the next pandemic and highlights a significant lack of capacity to collect and analyze data for challenges like obesity and tobacco, let alone emergent health risks.

(Data reported by the New York City Department of Health and Mental Hygiene, which participated in 2017 but not 2021, were excluded from these statistics.)

One Reason for the Gap

The Big Cities Health Coalition (BCHC) is a forum for the leaders of America’s largest metropolitan health departments to exchange strategies and jointly address issues to promote and protect the health and safety of the 61 million people they serve.