How big cities are addressing the drug overdose epidemic 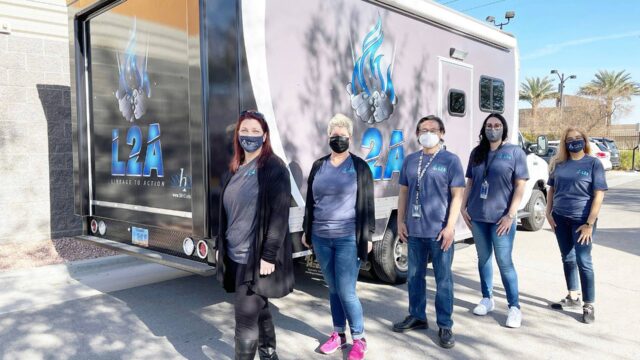 The U.S. recently realized another grim milestone: 107,000 deaths from drug overdose in 2021—about 4/5ths of those involved opioids. That’s the highest death count ever recorded: 15% higher than 2020, which in turn had 30% more drug-related deaths than 2019. Here are some of the ways big city public health departments are working to prevent and mitigate the epidemic that’s been exacerbated by the pandemic.

While the health care system works to treat substance use disorder (SUD), public health departments focus both on preventing SUD and on mitigating the most harmful effects of substance misuse. In the past two years, many big city health departments have boosted their harm reduction strategies by distributing naloxone (an FDA-approved medication that can rapidly reverse the effects of an opioid overdose) and fentanyl test strips (which show if a drug has been laced with the powerful synthetic opioid), as well as educating people on how to use these tools properly.

Southern Nevada Health District (SNHD), which serves Las Vegas and the surrounding county, provides fentanyl test strips through its pharmacy and trains community partners and agencies to distribute the strips. SNHD also runs mobile units (pictured above) that provides people who are struggling with SUDs with overdose education, naloxone, and referrals to essential services such as housing, mental and behavioral health care services, medical care, and transportation.

Public Health – Seattle & King County conducted focus groups with people who had had exposure to fentanyl to create its highly successful Laced and Lethal social media campaign that launched in March 2021. The campaign focuses on providing important information to kids and adults about fentanyl in a way that doesn’t stigmatize and therefore alienate the audience. To date, the campaign has had more than 300,000 engagements and has generated more than 3,000 mail orders for free naloxone kits.

Philadelphia decriminalized fentanyl test strips in August 2021. Since then, the Department of Health has held 45 pop-up events across the city to distribute free kits containing 10 fentanyl test strips and instructions for ordering free naloxone and test strips by mail. At the events, public health workers conducted live demonstrations of how to use the test strips using a Tums, water bottle cap, and sterile water. The department also established a “Narcan Near Me” tower at a library in West Philly that provides free naloxone and other overdose reversal supplies 24 hours a day, seven days a week. This is the first of two towers to be installed in Philadelphia, and the first in a major U.S. city. The tower acts as a locker, containing 22 overdose prevention kits that can be accessed by tapping the touch screen on the front of the device. In an emergency, the kiosk can connect directly to 911. Each kit contains two doses of naloxone, gloves, face shields, and a visual aid on how to administer the medication.

In September 2021, the Denver Department of Public Health and Environment began offering free fentanyl testing strips and naloxone to city residents. From mid-February to mid-April this year, the department received more than 4,700 orders. Last month the city’s sheriff department also launched a 90-day pilot Harm Reduction Release Bag Program. Every individual released from the downtown detention center or county jail will receive a bag containing a dose of naloxone, five fentanyl test strips, and information about medication assisted treatment services and how to get additional naloxone doses.

In addition to providing test strips and naloxone, New York City’s Department of Health and Mental Hygiene went a step further last November by establishing the nation’s first Overdose Prevention Centers (OPCs) at two sites in Washington Heights and East Harlem. OPC services have been used over 14,000 times by more than 1,000 individuals. As of April 3, staff have averted more than 230 overdoses since opening. OPCs also provide wraparound services for people who use drugs, connecting them to social services, care, and treatment.

Substance use disorder often has strong ties to mental health issues, and big cities have also been expanding mental health services in innovative ways. Denver launched its STAR program (Support Team Assisted Response) just a few months into the pandemic. The program sends, when appropriate, mental health clinicians paired with EMTs instead of police on 911 calls. Thanks to early successes, Denver has expanded the program; it has three vans and eight teams operating from 6 a.m. to 10 p.m. seven days a week and has responded to more than 2,200 calls that otherwise would have been dispatched to police.

Since the murder of George Floyd, Minneapolis has been under particular scrutiny for its public safety tactics. In August 2021, the Minneapolis Health Department contracted with a majority Black-owned business to operate its Behavioral Crisis Response teams. The mobile units, staffed by licensed mental health professionals, are dispatched by 911 for behavioral health situations. Dispatchers only send police if they determine that a scene needs to be cleared first or if the response team requests police assistance.

Columbus established a Mobile Crisis Response Unit in 2018 and has increasingly called upon social workers from the city public health department when a 911 call involves a mental health or substance use crisis.

To continue providing and expanding upon these life-saving programs, city health departments need additional resources and policy change from the federal government. The Big Cities Health Coalition, a forum of 35 of the nation’s largest health departments, advocates for the following: