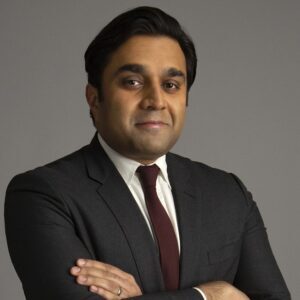 Dr. Ashwin Vasan is the Commissioner of the New York City Department of Health and Mental Hygiene. Dr. Vasan is a primary care physician, epidemiologist and public health expert with nearly 20 years of experience working to improve physical and mental health, social welfare and public policy for marginalized populations here in New York City, nationally and globally. Since 2014 he has served on the faculty at the Columbia University Mailman School of Public Health and Vagelos College of Physicians and Surgeons, and he continues to see patients as a primary care internist in the Division of General Medicine at New York-Presbyterian Hospital/Columbia University Irving Medical Center.

Dr. Vasan most recently served as the President and CEO of Fountain House, a national nonprofit fighting to improve health, increase opportunity, and end social and economic isolation for people most impacted by mental illness. During his tenure, he grew the organization from a New York-based community mental health organization to a national network across eight markets, and grew the budget by nearly $20 million annually. He helped navigate the organization through COVID-19 by driving new telehealth and digital mental health programs while its physical locations closed, as well as developing new community-based outreach and accompaniment programs. Further, Dr. Vasan led the creation of a national policy office in Washington, D.C., working to change national mental health policy on the issues of crisis response services and funding for and quality of community-based mental health services.

From 2016 to 2019, Dr. Vasan served as the founding Executive Director of the Health Access Equity Unit at the NYC Department of Health and Mental Hygiene, which focused on the intersection of clinical and social services for the care of people involved in the justice system and other vulnerable populations — a first-of-its-kind government program in the nation. Under his leadership the team launched the NYC Health Justice Network — an innovative partnership between community-based primary care providers, criminal legal system reentry organizations, the Health Department and the Fund for Public Health — to embed tech-enabled, peer community health workers to promote health and wellness of people reentering the community from incarceration, and their families. The program is currently under evaluation through the CDC Prevention Research Center grant to NYU and CUNY.

Early in his career, Dr. Vasan spent nearly a decade at the intersection of global health, HIV and primary care, working with the nonprofit Partners In Health (PIH) in Rwanda, Lesotho and Boston, and at the World Health Organization (WHO) in Uganda and Geneva. At PIH, he led efforts to improve integrated primary care and HIV care delivery using WHO Integrated Management guidelines and training. Dr. Vasan worked as a Technical Officer under Dr. Jim Yong Kim on the WHO/UNAIDS “3by5 Initiative” to expand HIV treatment access in the developing world, focusing on pricing and access to HIV medications, and on health worker training and education, and he then supported the Ugandan government in the scale-up and quality improvement of HIV treatment in the southwest of the country, among the first areas in sub-Saharan Africa to attempt front-line government HIV treatment.

Dr. Vasan received his BA in Economics from the University of California, Los Angeles; his ScM in Epidemiology from the Harvard School of Public Health; his MD from the University of Michigan; and his PhD in Public Health from the London School of Hygiene and Tropical Medicine. He completed his clinical training in internal medicine-primary care at New York Presbyterian Hospital. He has published widely in the academic literature in journals such as the Lancet, Bulletin of the World Health Organization, Journal of General Internal Medicine, Health Policy and Planning, and AIDS, and has been featured in mainstream media outlets, including the New York Times, BBC World News, NPR, Al Jazeera, the Guardian, and NBC News Think.

He is a proud husband and father of three school-aged children who fill up every free moment of his time.